As I celebrate my birthday today the 16th of December the people of Libya, Ethiopia, Sudan and all other African countries ravaged by conflict came into my mind.

Civil war is always something that impacts on children, the elderly and women.  Disputing parties must always find reasoning before embarking on self-destructing adventures like the one in the Tigray region of Ethiopia. 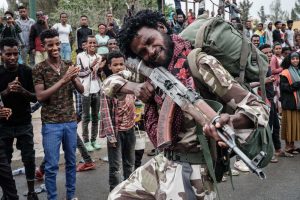 Whatever the grievances might be war will never be the solution in addressing them. War is detrimental to the development of this great continent called Africa. Infrastructure is being destroyed in Ethiopia on daily basis. Money that could have been used for developing other projects is being channeled towards buying weaponry.

Power is a tool that must be used to entrench African democracy it must never be used to suppress people’s rights or advance tribal fights. Prime Minister Abiy Ahmed has remained resilience in the fight against insurgence and he is in control of the country’s resources. His control of economic power in Ethiopia means he can sustain an onslaught on the opposition held areas and he is also recognized as the country’s Prime Minister.

He also enjoys regional support, whilst it boggles the mind how the opposition is continuing on its offensive against the government and who is behind the sponsorship of the opposition. Africa must never be used as a testing ground for weapons no matter.

Destabilization of countries always benefit monopoly capital hence the need for Africans to always use Inclusive National Dialogue as a tool to ensure peace and tranquility prevails in our great continent. Those in power must also not abuse their proximity to repressive state apparatus to repress the weak and vulnerable for their own advantage.

It’s very possible for Africa to move with speed and develop this great continent to the levels of Europe because we have the resources to do so but we are far more engrossed in fighting each other rather than development.

The human resources that is being put to waste by fighting endless ethnic wars can be used in the development of the continent.

As a continent our institutions must also be strong in order to respond to threats and deal with them as a matter of urgency. Wars can’t be allowed to take many years before continental response. As I celebrate my birthday Libya has not known peace since 2011 and there is no clear response from the AU. If we can’t solve our own problems no one will take us serious or even take us seriously as business partners.

We shall remain punching bags forever if we fail to act when the situation requires us to do so. As leaders of the Young African Leaders Forum (YALF) we urge the disputing parties in Ethiopia to engage each other in a process of national dialogue aimed at restoring lasting peace.

It is more than two decades since pro-democracy grassroots organizations led struggles that eventually resulted in the overthrow of... read more

Man is the measure of all things. He forms the bedrock of any society, and his nature determines the... read more