The Matrix is not the physical world; the Matrix is also not the Internet, despite what many seem to believe. The Matrix spans and transcends both these worlds. It has existed since the dawn of civilization, and it will continue to exist until its collapse.
Like the physical world the Internet expands over the same dimensions, after exploring this subject for a very long time the iNfono Network and Young African Leaders Forum has come to realize what it is going to take to develop Africa and other 3rd world environments to its 1st world Status.
Every country in the world experience this phenomenon and it is correctable with world support. But let me explain the dimensions first; large corporations, governments, schools, religious institutions, and even non-profit orgs. Every institution will reach a point in its existence where its primary function becomes self-preservation and perpetuation, instead of serving human need. At this point it becomes a machine of the Matrix. For example, when they become machines, governments cease to serve people and instead seek to extend their power over them; corporations prioritize increasing shareholder value over producing quality products or otherwise serving the public good; schools view students as a means and not an end; religious organizations equate membership with salvation (and actively oppose other teachings and even independent practice); and non-profits and charities spend more budget on fund raising activity than on their original focus. Inevitably all large institutions eventually become machines. They become too big for Humanity. This is the current Surface dimension, in the physical world.
If we conceive of the Web as a data ocean, most of us are interacting with the wavy, transparent, easily navigable Surface Web. The Surface Web is the portion of the Web that has been crawled and indexed (and thus searchable) by standard search engines such as Google or Bing via a regular web browser. In the darkness below, beneath the electronic thermocline, are the abyssal depths of the Deep Web (also referred to as the Invisible Web or Hidden Web) – the portion of the web that has not been crawled and indexed, and thus is beyond the sonar reach of standard search engines. It is technically impossible to estimate accurately the size of the Deep Web. However, it is telling that Google – currently the largest search engine – has only indexed 4-16 percent of the Surface Web. The Deep Web is approximately 400-500 times more massive than the Surface Web. It is estimated that the data stored on just the 60 largest Deep Web sites alone are 40 times larger than the size of the entire Surface Web. This is the current Surface dimension, on the Internet world.

Beyond both the physical and Web Surface dimensions, we experience a cast of anonymized Darknet operators whose activities are of enormous concern to government and to the public; drug dealers, hackers, hitmen, hoaxers, human traffickers, pimps, child pornographers, identity thieves, money launderers, leakers, political extremists, vigilantes, terrorists, and spies.
But beyond those engaged in criminal or highly questionable activity there are also well-intentioned individuals (including gamers, journalists, activists, and others) who simply want additional privacy. In the classic formulation of privacy advanced by Supreme Court
Justice and its laws.
So why am I compiling this Grant proposal; it has come to our knowledge that these activities are greatly contributing to our 3rd world country status in Africa and worldwide being underdeveloped for the following reasons;

In particular, we would like to stress that we will pay attention to the following:
1. Socio-cultural forces are involved in the “generation and sustainability” of criminal entities that use the Darknet. For example, some countries do not have functioning or sufficient markets in legal goods, a context in which the Darknet may actually facilitate increased social welfare and economic efficiency. States in such a situation may have little incentive to enforce cybercrime laws, while free-riding on the law enforcement, regulatory, and national security efforts against truly bad actors carried out by other states.
2. The Deep Web and the Darknet are attractive to many because of the prosecution, regulation, and national security surveillance efforts of states in the physical world and Surface Web. Illicit activity is being driven below the electronic thermocline of common search engines and usual investigative techniques, and states must be willing to dive beneath it to gather information and take action.
3. The trans-nationality of these networks frustrates eradication, regulatory, and prosecution efforts of any one state, creating cooperation, collective action, and law harmonization problems for state actors attempting to work together to counter illicit use of the Internet.
4. Rather than eradication, policymakers must focus systematically on bad actors and bad patterns, while striving to anticipate and favourably shape evolution of the Darknet.
At times this effort might, like anti-terrorist efforts globally, risk resembling “whack-a-mole”. It will only succeed over time if a broader strategy including prevention, detection, and response is developed and followed with broad international participation and support.
5. Other Continents in particular to stop taking responsibility for their neighbours development and growth initiation and work together to implement solutions.

However, note that computers aren’t the only means of accomplishing this, and this time period isn’t the first one of Exodus. In the 1960s, for example, people departed from the Matrix en-mass and independently created art, culture, and music, largely catalyzed by psychedelic drugs. Unfortunately, much of this structure collapsed due to a number of reasons, the main one being the hasty, ill-considered and unsustainable manner of its construction and the subsequent institutional and legal backlash. Miraculously, however, many of the core ideas have persisted, and their proliferation is largely the reason I am Aware and able to compile this document today. It would seem that the present catalyst is a combination of the Internet and again psychedelics. Both of these phenomena provide a way of disconnecting yourself from the programmed reality and assumptions of the Matrix and taking your perceptions into your own hands. However, your “perception” is nothing but your individual dream that you have created as you have gone through life. There is the dream of the society that has been passed down generation after generation and instilled into your mind by your parents, friends, schools, and institutions. And then there is your individual dream. Each step of the way in your life you have lived subjectively, and depending upon how and where you grew up, who you hung around with, and the habits you formed, you created your little dream. Your “theory” on life while you stay completely unconscious of this. Everything that you think is “you”, “I”, “me”, and everything you believe that you identify with is simply not you. It is not the truth. It is part of the giant web of individual dreams that everyone is in the clutches of on our planet. This is one of the main reasons why this world is the way it is, why it is so chaotic. You will scorn anyone who does not dream what you dream of, and someone will do the same to you. It is impossible for us to live the same individual dream because we cannot know everything about each other down to our core. It is a constant fog that grows bigger and bigger and more dense as each day passes. It is your ego and it is my ego. The dream is not real. If we want to even begin to understand what it means to exist as a human being on this planet and evolve, this truth must be learned and it is just the beginning. Somewhere along the way, the entities that have been running the show figured out how the ego works, and they have been doing a damn good job at distracting us from trying to find a way out of our dreams and the dream of society. Psychedelics are simply a tool, but one of many to truly explore and expand your consciousness. However, whether it be psychedelic substances or meditation, it is not the ultimate answer. It is simply showing you the door, but it is your choice whether or not you want to enter into the other side.
The biggest illusion or realisation to encounter as an individual is that the Matrix consist of trillions in exchanged currencies and approximately 50% of the Matrix has been altered by the systems own neglect to create sustainable industries in 3rd world environments. However, the self-use of the underworld to sustain power within the Matrix itself. The Matrix itself created a cast of anonymized Darknet operators whose activities are of enormous concern to government and to the public; drug dealers, hackers, hitmen, hoaxers, human traffickers, pimps, child pornographers, identity thieves, money launderers, leakers, political extremists, vigilantes, terrorists, and spies.

The only logical correction for the split in consciousness is the participation in the rise of a new economic awareness by the resisters of the Matrix.

The rise of the Darknet.

Resisting the Matrix
100’s of billions in different currencies are been split out of the Matrix over decades of elegit activities, laundered by individuals as a mean, not able to be taken back into the Matrix, for lawful reasons, forced to be part of illegal activities, Socio-cultural forces are involved in the “generation and sustainability” of criminal entities that use the Darknet. For reasons that some countries do not have functioning or sufficient markets in legal goods, a context in which the Darknet may actually facilitate increased social welfare and economic efficiency. States in such a situation may have little incentive to enforce cybercrime laws, while free-riding on the law enforcement, regulatory, and national security efforts against the accused as truly bad actors carried out by other states.

YALF, MINISTRY OF HEALTH to campaign against tuberculosis

The Young African Leaders Forum (YALF) and the Federal Ministry of Health, Ethiopia will carryout a city-wide campaign against... read more

As part of our organizational objective to empower African young people to participate actively in the society so that... read more

“Write an essay of approximately 500-800 words on how Africa as a whole should be developed into a first... read more

Invitation to the 2016 YALF Annual Summit

When people can get in touch, they can achieve many good things together. Connection or networking is a fundamental... read more 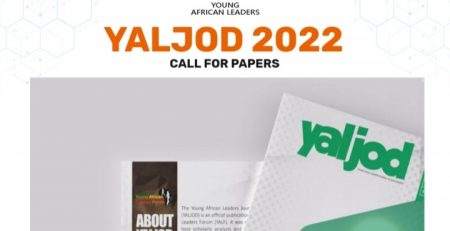