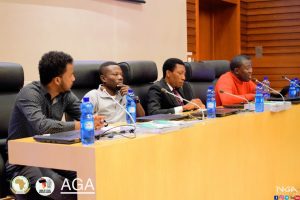 It is more than two decades since pro-democracy grassroots organizations led struggles that eventually resulted in the overthrow of many despots and tyrants in Africa. Since then, there have been some noticeable improvements in the transition to democratic governance all over the continent. This does not mean, however, that African democracies are without problems, but a truism is that the richly-blessed continent has continued to make steady progress towards institutionalizing the world’s most coveted system of governance.

Democracy can only be bolstered in states where there is respect for the basic human rights. In some parts of Africa, the process seems to be suffering some iterant setbacks due to the neglect of the fundamental human rights. For instance, Cameroonians are tacitly disenfranchised as their incumbent President, Paul Biya, has done everything within his capacity to modify the constitution and remain as an everlasting monarch. The same applies to Equatorial Guinea where Tedoro Nguema is reported to be amongst the worst abusers of human rights.  And the case of Yoweri Museveni remaining in power till date – as well as the recent Burundian third-term saga– are shocks to the collective growth of the continent’s democracy.

Africa’s problem has been in its conception of democracy. The idea of democracy itself is viewed almost exclusively as a Western concept of which the continent now stands desperately in need. Many African statesmen presume that democratic values and practices are alien to the continent and should not be accepted. What has been consistently ignored is that democratic values have been as indigenous to Africans as they were to the ancient Greeks. The desire for representation, inclusion and participation in public affairs are universal to all humans; the difference rests on the methods of attaining these goals. Suffice it to say that the extent to which a society “democratizes” depends on its sociocultural milieu, whether it is African, Euro-American or Asian.

Recent developments have shown that the democratization process can actually work in Africa. Since democracy has been firmly established in Ghana, Botswana and Mauritius – nations which have made steady progress towards deepening participatory and inclusive governance– its potency to spread into other parts of Africa had become stronger. Nigeria – Africa’s largest economy and most populous country – also joined the league of democratic African nations when the former President Goodluck Jonathan chose to strengthen the bedrock of unity and deepen the country’s democratic governance rather than subvert the electoral process or result. That proved naysayers and doubters who thought Nigeria could not have credible elections wrong. However, his sacrifice has since been forgotten – and bore no fruit – because the incumbent president, Muhammadu Buhari opted for militarised democracy instead of according power to the people. The General remains a dictator in disguise – and his public address after the #EndSARS genocide reveals the oppressor in the man.

By 2023, young people in Nigeria will seek to right the wrong using their voter’s card. If their voice is not suppressed by the military, it would be because they spoke out with one voice and bore the brunt together. Their success would inspire Africa. If the largest democracy on the continent gets it right by 2023, others will. So far, only Mauritius ranks in full democracy category amongst African nations. Countries such as Benin, Botswana, Ghana, Namibia, Mauritius, Senegal and South Africa are progressively becoming beacons of political rights. All these goes to show that democracy will be institutionalized in Africa as long as selfless leaders keep emerging.

The continent requires leaders that will embrace true democracy and develop the moral courage to live up to democratic expectations. A democracy premised on the principles of selflessness, nobility, tolerance, truth, equality, justice, honesty, self-control and restraint is simply what Africa requires and emerging leaders in Africa can do well to achieve it.

Man is the measure of all things. He forms the bedrock of any society, and his nature determines the... read more

As I celebrate my birthday today the 16th of December the people of Libya, Ethiopia, Sudan and all other... read more